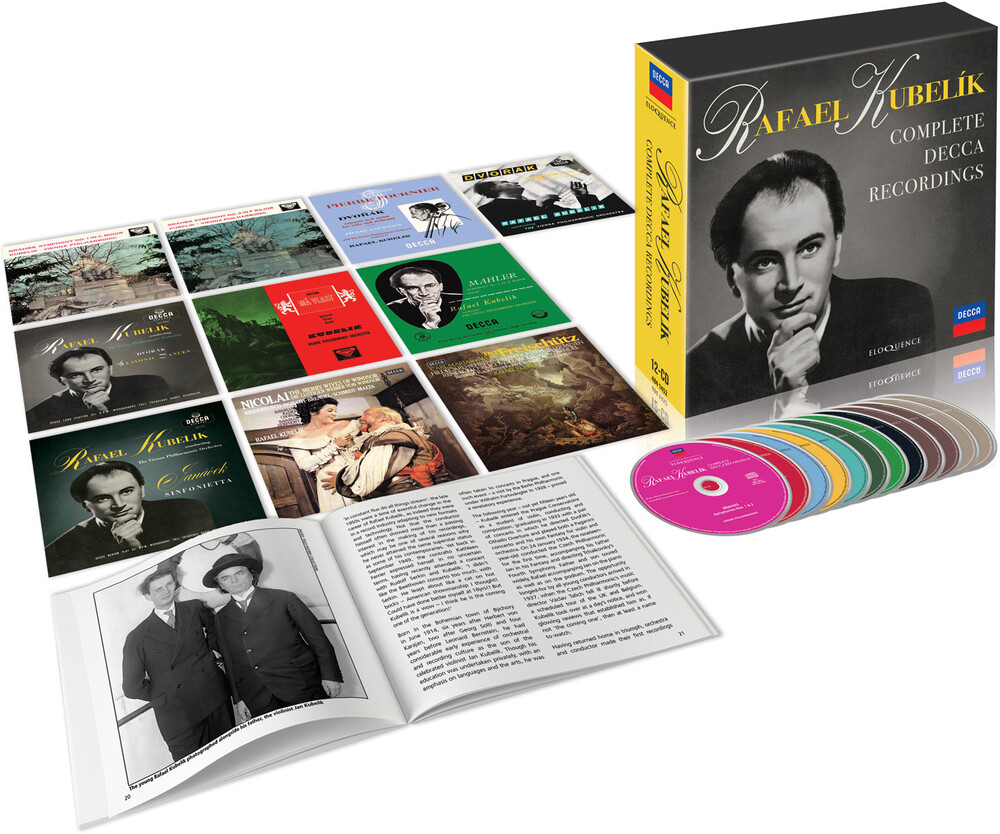 Rafael Kubelik, the Czech conductor, was in every way a big man: tall and robust in physique, he was the most generous of human beings and he inspired devoted affection among his friends and colleagues. This complete Decca collection finds Kubelík working with the Wiener Philharmoniker, the Israel Philharmonic, the Symphony Orchestra of the Bavarian Radio, and for a single operatic extract, the Orchestra of the Royal Opera House, Covent Garden. Rafael Kubelík had made his debut with the Vienna Philharmonic at the 1950 Salzburg Festival, and together they made a series of recordings during the late 1950s which have long been prized for their warmth and spontaneous-sounding expression. The Mahler First introduced countless listeners to the composer for the first time, as did the Janácek Sinfonietta. After the spectacular success of Kubelík's first Má Vlast recording, made in Chicago, the Vienna remake is softer edged but no less scored with the nationalistic fervour and colour that made the conductor synonymous with the piece until his death in 1996. Cast in the same mould as the Smetana are the Brahms symphonies and Tchaikovsky's Romeo and Juliet. In fact few other label-focused anthologies of Kubelík's recordings survey so wide a span: a quarter of a century from the Dvorák Cello Concerto with Pierre Fournier in 1954 to the 1979 recording of Der Freischütz, Weber's foundational work of German Romantic opera, strongly cast in the Decca tradition and led by the radiantly sung Agathe of Hildegard Behrens, then at the start of a career that would soon establish her as the leading Wagnerian soprano of her generation. In this Bavarian Radio appendix to his Decca career, Kubelík made a no less attractive recording of Nicolai's Merry Wives of Windsor, likewise transferring the atmosphere of the stage into the studio with the experience of decades behind him. Towards the end of Kubelík's Vienna years with Decca, he also performed and recorded in Israel. The Decca sessions in a cinema outside Tel Aviv yielded an account of Dvorák's Serenade for Strings in which critics had no trouble hearing the authentic voice of the Czech nation in exile, embodied in the figure of Kubelík for half a century. The booklet includes a full contextual account by Peter Quantrill of Kubelík's Decca career.
back to top