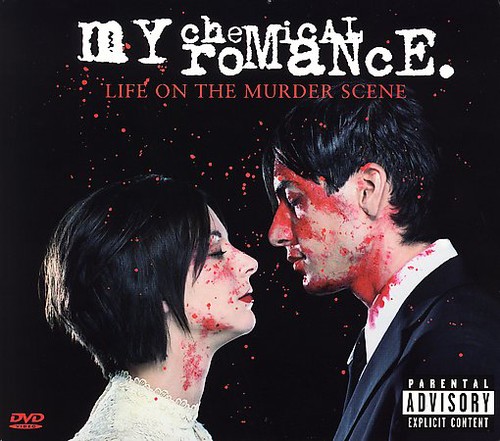 Now the CD+2 DVD package Life on the Murder Scene fans the flames of fanaticism with live performances, demos and rarities, including over 4 hours of footage of live performances, MTV2 $2 Bill, MTV Discover and Download, plus Sessions @ AOL, and Live @ Launch. The love affair with My Chemical Romance has just begun. Reprise. 2006.

''Life on the Murder Scene'' is the first live album by New Jersey quintet My Chemical Romance. It was released on March 21, 2006 (see 2006 in music). The release includes 3-discs (2 DVDs and 1 CD) of the whole history documenting the band from the start to present. ''Life on the Murder Scene'' is a predominantly live album, but also includes two demo tracks and a previously unreleased track. Models Jamisin Matthews and Jaime Andrews portray the demolition couple in cover photo, booklet, packaging, dvd art, and dvd menues.

One DVD documents the band on the road in the form of a diary and the other covers live footage, AOL Sessions, MTV ''$2 Bill'' performance, and 4 of their videos with the behind-the-scenes 'Making Of...' for three of them. The cover features a live version of "Demolition Lovers II" (cover of Three Cheers for Sweet Revenge).

The album has seen decent success in Australia, peaking at #2 on the ARIA Top 40 DVD Chart, and also in the U.S., peaking at #30 on the Billboard 200 and #1 on the Heetseekers. - Wikipedia

Mall punk didn't need saving, not with the Warped Tour gravy train continuing to steamroll summer competition, but My Chem and Fall Out Boy at least made it endearing to pure pop fans last year. (Just stay away from the concept albums, lads.) This live CD/DVD should capture some of that cheeky self-awareness.
This website uses cookies to personalize content and analyse traffic in order to offer you a better experience.
I accept Learn More
back to top