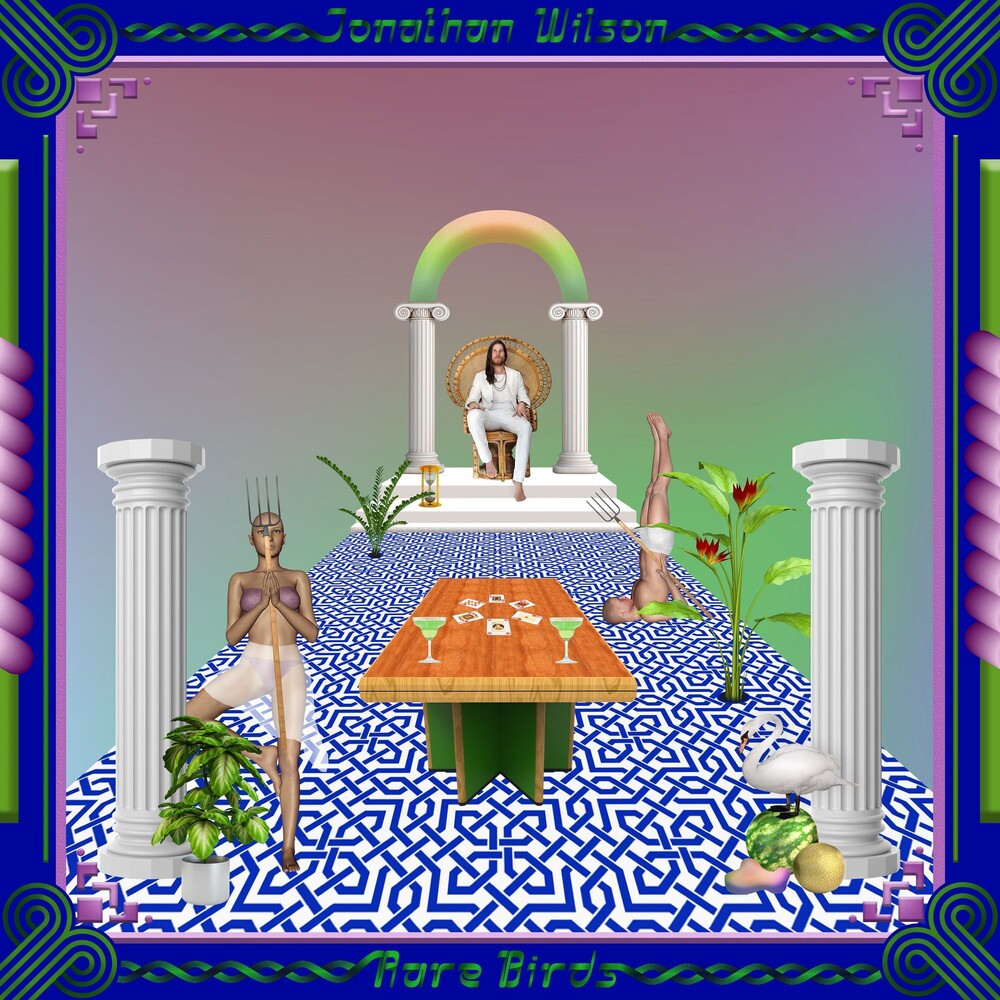 Although much of the album is comprised lyrically of meditations on a failed relationship and its aftermath, Wilson insists that Rare Birds is not really a concept album. “It's meant more as a healing affair, a rejuvenation, a reconciliation, for others, and for me. I wanted to balance personal narrative with the need I feel for calming healing music. I think we need journeys in sound, psychedelic gossamer-winged music that includes elements consciously and purposefully to incite hope, positivity, longing, reckless abandon and regret. It's all in there.”

And, for this one, music critics will need to retire the comparisons to heritage rockers and Laurel Canyon troubadours as they’re hardly useful anymore. Wilson's new sound takes a synthetic/acoustic, best-of-both-worlds analogue/digital hybrid approach to achieve the complexity, sonic density and glossy hi-fi coating of Rare Birds. Heard for the first time on a Jonathan Wilson album are the sounds of synthesizers and drum machines.

“The Neil Young, CSN, Dennis Wilson and Tom Petty comparisons for the first two records were flattering, but I didn't ever really see it that way myself.”  The things that Wilson had been obsessing on, and he can clearly hear the influences of, are artists like Talk Talk, Arthur Russell, maybe a Sleigh Bells-meet-George Harrison kinda thing. “I hear mostly ME actually. On this album I’m quoting from earlier versions of myself, continuing a narrative I’ve had musically since I got my first 4-track when I was thirteen. I hear the influence of my vocal coach. I hear the influence of having worked in my studio with Roger Waters for months during the same time period that I was making this record. That gave me the feeling I could expand into certain psychedelic and found sound labyrinths.” There are voices, sirens, children playing, and more enhancing spatial sounds, while musical compadres Lana Del Rey and Josh Tillman (aka Father John Misty) appear as backing vocalists on “Living With Myself” and “49 Hairflips”, respectively.

Wilson describes Rare Birds as a "maximalist," high density album more influenced by 80s British production than anything to do with Southern California in 1970s. It’s a dynamic new approach for Wilson that calls to mind one of Peter Gabriel's early solo albums or even mid-period Kate Bush. “This album is a hell of a lot more Trevor Horn than anything, you know, Laurel Canyon-related,” he adds.  The song that “started the whole record” was “Loving You”. Says Wilson, “I was floundering in my studio pacing the floors for months, scratching my head for a clue to how I would embark upon the process of making Rare Birds. I was waiting on a sign, a catalyst.” The catalyst came in the form of experimental ambient and new age musician Larajji. The pair had played together in the past, on the east coast, but it’s rare that Larajji is in Los Angeles and available to record. Wilson invited him to his Echo Park studio for a few sessions. “I had “Loving You” kicking around in a voice note on my phone for a while, something in it was my subtle ode to John Lennon... Larajii is one of the most musical humans I have ever come across, and every twist and turn he takes is documented here, it was not multiple passes, it was pure Larajji in the moment. I then went and sang a “scratch vocal”, which was always meant to be a scratch but I’ll admit it had spirit so I left it all the way down the line.” Wilson says simply of the song, “it’s very authentic in that the longing was very real.”

Of “Over The Midnight”, the first track released from Rare Birds, Wilson says, “I wanted to write a song about a sacred place for lovers to exist and I named that destination, process, mood or feeling  ‘Over the Midnight’. It’s a place where nothing is savage.” In one of Wilson’s favourite lines on the album he sings “This world it is burning, but don’t it feel incredible? / Whisper in my ear and tell me what you see in the flames.”

“On some of the songs with string sections, multiple layers of synths, guitars, vocals - all the moving parts - the track count may reach 120-150 tracks”, he explains. “What I invariably end up doing is setting up a punishing process of giving myself a sonic puzzle where I then have to sort out the relationships of all these ideas, these tracks, these frequencies. This is how I make all of my albums, and even records I produce for others always seem to have that same lush and layered orchestral component. I subject myself to many months of meditation really, figuring out why I was compelled to add this or that, and editing, getting to the essence of what I hear the song as. More and more that’s maximalist, and big.” And while the recording process is often complex, one of the album’s most striking moments came together quickly. “What you hear with “There’s a Light” is the first time the song was ever played”, says Wilson. “I wrote it on my piano during the album tracking and we cut it the next day. This is the first take. It’s completely the first time I ever sang the song in my life, and the drum take that Joey Waronker put down blows my mind every time.”

Of Rare Birds as a whole Wilson says, “I want my music to hit people like an emotional tidal wave. With my songwriting it's never about a clever couplet or smug turn of phrase, it's about the intensity, the impact. Besides, we're all fishing downstream from Townes Van Zandt anyway, so the only thing left to do is go BIG."