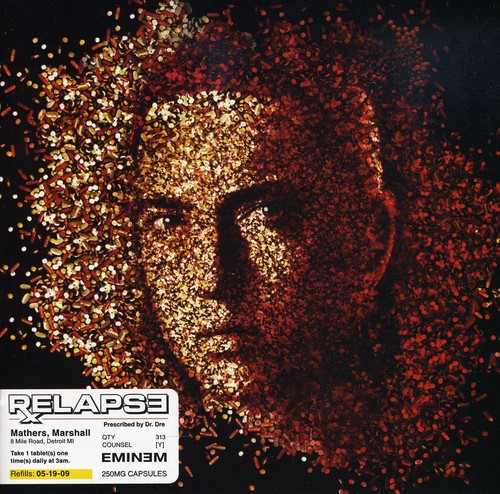 ''Relapse'' is the sixth studio album by American rapper Eminem, released May 15, 2009, on Interscope Records. It is his first album of original material since ''Encore'' (2004), following a five-year hiatus from recording due to his addiction to sleeping pills and issues with writer's block. Recording sessions for the album took place during 2007 to 2009 at several recording studios, and production was handled primarily by Dr. Dre, Mark Batson, and Eminem. Conceptually, ''Relapse'' concerns the ending of his drug rehabilitation, rapping after a fictional relapse, and the return of his Slim Shady alter-ego.

The album debuted at number one on the US ''Billboard'' 200 chart, selling 608,000 copies in its first week. One of the most anticipated album releases of 2009, it ultimately sold two million copies in the United States and spawned three singles that attained chart success. Upon its release, ''Relapse'' received generally mixed reviews from most music critics, who were mostly divided in their responses towards Eminem's lyrics and themes. It earned him Grammy Awards for Best Rap Album and Best Rap Performance by a Duo or Group for the promotional single "Crack a Bottle" at the 52nd Grammy Awards. As of June 7, 2010, the album has sold three million copies worldwide. - Wikipedia