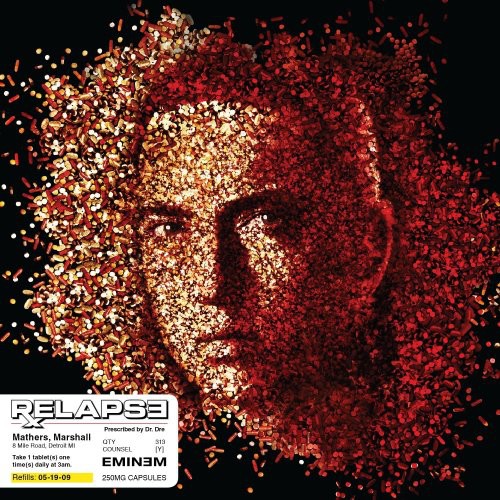 ''Relapse'' is the sixth studio album by American rapper Eminem, released May 15, 2009, on Interscope Records. It is his first album of original material since ''Encore'' (2004), following a five-year hiatus from recording due to his addiction to sleeping pills and issues with writer's block. Recording sessions for the album took place during 2007 to 2009 at several recording studios, and production was handled primarily by Dr. Dre, Mark Batson, and Eminem. Conceptually, ''Relapse'' concerns the ending of his drug rehabilitation, rapping after a fictional relapse, and the return of his Slim Shady alter-ego.

The album debuted at number one on the US ''Billboard'' 200 chart, selling 608,000 copies in its first week. One of the most anticipated album releases of 2009, it ultimately sold two million copies in the United States and spawned three singles that attained chart success. Upon its release, ''Relapse'' received generally mixed reviews from most music critics, who were mostly divided in their responses towards Eminem's lyrics and themes. It earned him Grammy Awards for Best Rap Album and Best Rap Performance by a Duo or Group for the promotional single "Crack a Bottle" at the 52nd Grammy Awards. As of June 7, 2010, the album has sold three million copies worldwide. - Wikipedia

Generation Twitter/Facebook is prone to oversharing (to put it mildly), so when an artist takes any time off, the speculation is both rampant and ridiculous. To be fair, it has been a pretty substantial five years between records for Marshall Mathers, but short of 8 Mile 2, weâ€™ll never know if he, for example, gained enough weight to resemble an actual M&M (peanut variety). Regardless, the "unretirement" looks like a good idea so far. "Crack a Bottle" leaked almost three months before Relapseâ€™s street date, and did so to great acclaim, sharing verses with not only 50 Cent, but Dr. Dreâ€”both of whom are no strangers to lengthily delayed albums. The latest word is that both 50 and Em are planning two records in 2009 (although Dreâ€™s Detox is still notoriously nonexistent). We just hope all of this signals a return to the creativity and poignancy of The Marshall Mathers LP.