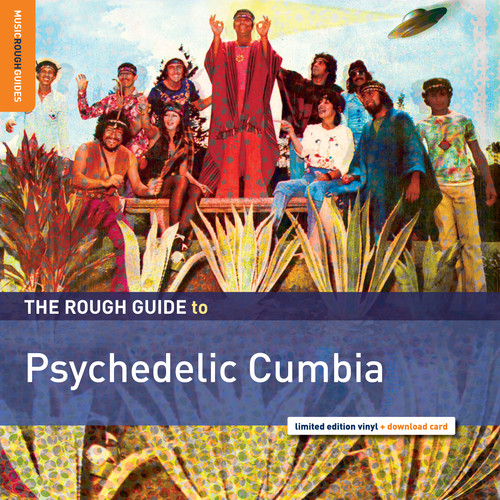 Psychedelic rock (especially the Latin-flavoured kind, as practiced by Santana, Malo, Azteca and the like) and cumbia came of age together in the mid to late 1960s under parallel circumstances. In Peru (and to a lesser extent Mexico, Venezuela and Colombia) the tools of rock and roll – namely electric guitar and organ – were already quite popular among the youth of the day and it makes perfect sense that this originally acoustic Afro-Colombian coastal social dance music would be reborn under the influence of psychedelic culture by the late 1960s, in order to make it relevant to the younger generation. Add to that the strong surf culture in places like coastal Peru and Mexico and conditions were ripe for just the sort of experimentation sampled here. In addition it can be said that ‘imported’ hippie culture and rock and roll were seen as a real threat to order and decency by dictatorships from Brazil to Cuba. So when many Latin American governments decided to repress the rock and roll ‘rebellion’ and psychedelic youth culture swirling around them, some of that vibe and energy was sublimated and folded into more marginalised and nationalistically acceptable tropical musical formats like samba, cumbia or salsa. Peru has had its share of great electric guitarists bending strings to the rolling beats of cumbia – from Enrique Delgado to José Luis Carballo – who came from its own important domestic tradition of criollo guitar music as much as rock). So it’s not an exaggeration to say cumbia peruana (and regional variants at times referred to as cumbia andina, cumbia selvática, and more recently chicha) has had the lion’s share of Carlos Santana influences evident in the mix. For this reason we start the compilation with a suite of five vintage Peruvian recordings from some of the greats like Juaneco y su Combo. Interestingly the Peruvian psych sound so prevalent in the early 1970s had a profound effect on the originators of cumbia; hence we offer the two fine examples from 1970s Colombia that follow. We round out the mix with a gaggle of contemporary artists from Chile, Mexico, USA, Peru, Colombia, Argentina, and Germany, bringing the psychedelic tropical vibe up to date while still retaining the trippy trappings of yesteryear.