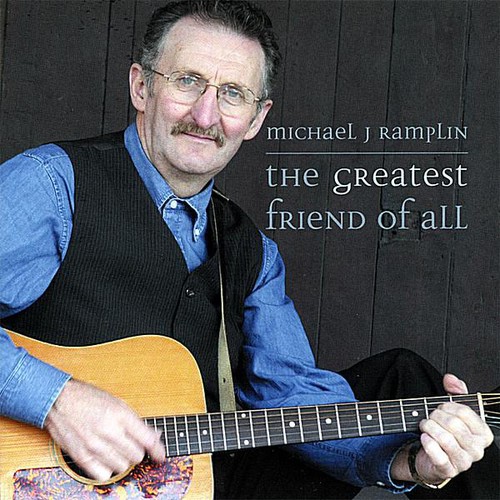 After riding high on the (New Christian Music) Euro Chart with his tribute song "Johnny Cash Led Men to Jesus", Michael.J.Ramplin says, "I think there are a lot of people out there who love Traditional Country Music, but are being starved of it today. Michael was born in Lancs UK during WWII, and him and his brother Tony joined the "Boys Brigade" as lads, where they were taught about Jesus. This teaching never left Michael, even though as a teenager he started drinking heavily and threw a good job in to go away to sea, against his parents wishes. When in the "Merchant Navy", Michael says wherever he went in the world there was always Country Music on the Jukeboxes in the bars, and if there was a "Mike", he would usually get up and sing. Coming out of the Navy, Michael got married, and they had a son, Carl, but unable to settle down he got to drinking heavily and finished up living rough, and his marriage broke up. At this time a doctor told him that if he didn't stop his drinking he wouldn't live 18 mths. Michaels brother Tony had emigrated to Canada by this time and had re-commited his life to Jesus, him and his wife Deane, and they used to write home and say how happy they were. So after the hard word from the doctor, Michael went back home to live, and shortly after that, Michael and his Parents all went to a little Gospel Hall in a nearby town, and after the preaching there was an appeal for people to become "Christians" and they all made a decision. Michael says that when he was prayed for in the meeting, he felt such a peace that he just knew Jesus was real, and not long after that he was prayed for at a big Christian gathering and was set free from Alcoholism once and for all. Since then, Michael started playing the guitar in Church and then began writing his own songs. Later on he became a Prison visitor, and he goes into local prisons and shares his testimony and sings one or two of his songs. Also for the last few years Michael has been going out to Albania with some friends, to support kids at an orphanage there. In these days, Michael and his Friends, Martin Dawson on Guitar/Mandolin, and Adele Procter on Fiddle, go round giving Gospel Concerts and sharing their Faith in Song and Testimony. More recently Michael has had songs on the "New Christian Music" (NCM) compilation Albums and his songs have been heard worldwide, thanks to Paul Davis of NCM. Lately Michael was awarded a "Radio Mike" award, for the promotion of Christian Music to the media, this was presented to him by George Hamilton IV. His latest Album "The Greatest Friend of All" is the second Album of his own Country Gospel songs.