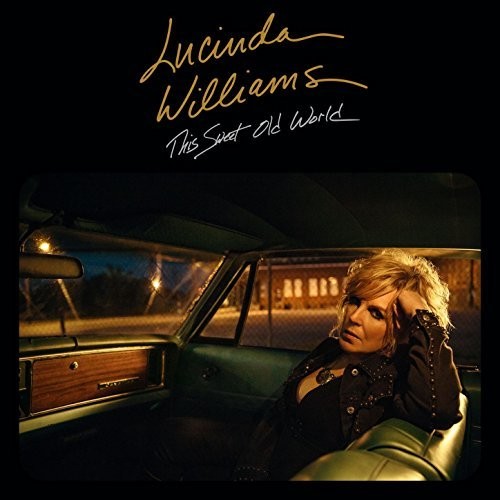 On This Sweet Old World, Williams is supported by her touring and studio band: guitarist Stuart Mathis, bassist David Sutton, and drummer Butch Norton. Longtime collaborator Greg Leisz – who participated in early sessions for the 1992 album, and co-produced Williams’ most recent studio releases, The Ghosts of Highway 20 (2016) and Down Where the Spirit Meets the Bone (2014) – contributes spectacular guitar work.

The package is augmented by four newly recorded bonus tracks that harken back to Williams’ early performing career.

Sweet Old World contained several durable songs – the title track, “Pineola,” “Something About What Happens When We Talk,” and “Little Angel Little Brother” – that have been staples of Williams’ live sets since their original release.

However, the album as a whole has received comparatively short shrift, coming as it did between two landmarks in the musician’s career: her breakthrough self-titled album (issued by Rough Trade Records in 1988, and re-released in 2014 with a bonus CD of live material) and her major commercial hit Car Wheels On a Gravel Road (released by Mercury in 1998).

Call Sweet Old World the red-headed stepchild of Williams’ catalog, and she laughs in recognition.

She says, “Sweet Old World was really the only album after the Rough Trade album that sort of fell through the cracks a little bit. I remember going into a record store in Nashville and seeing it in the bin, and it had this sticker on it that said ‘out of print.’ I went up to the manager of this little indie store and said, ‘This isn’t out of print!’ He said, ‘Well, that’s what I had heard.’ It didn’t get attention paid to it that it should have had.”

To mark the quarter-century anniversary of the album, Williams and Overby – after some initial trepidation on the singer’s part – decided to go into engineer David Bianco’s North Hollywood studio Dave’s Room, where her last two albums were recorded, and recut the entire record in 10 days of sessions. Williams says, “I wanted to stretch some of the songs out and bring them up to date a little bit more. Some I’ve continued to do over the years, like ‘Pineola’ and ‘Sweet Old World.’ Those have stood the test of time, so those have basically the same arrangements. But I wasn’t happy with the way every song on the record had been recorded.

“I wasn’t sure I wanted to revisit all those songs. But ‘Six Blocks Way’ sounds a hundred times better than the original. It’s more jangly – it’s reminiscent of an early Tom Petty recording, and the Byrds, too. Stuart Mathis was doing the 12-string on that. Another one on the record that really surprised me is ‘Lines Around Your Eyes.’ Those were a little bit of a challenge – I initially rolled my eyes and said, ‘Really?’ And ‘Sidewalks of the City’ is like a different song now — it’s so relevant today.”

While Sweet Old World featured guest instrumentalists, This Sweet Old World eschews additional players, utilizing just the muscular band and Leisz. Stripped of their countrified arrangements, the songs “Prove My Love” and “Memphis Pearl” shine anew. Says Williams, “We talked about this and labored over it after we had the initial tracks down, about whether we should add other instruments, fiddle or whatever. Everybody said it sounds so raw and tight and good and spontaneous.”

The Sweet Old World song “He Never Got Enough Love” underwent a nearly complete metamorphosis, with Williams returning to her first draft of the lyrics and adding additional verses. The 2017 rendering appears on This Sweet Old World under the title “Drivin’ Down a Dead End Street.”

Williams says, “Tom saw the original lyrics; ‘He was drivin’ down a dead end street’ was the refrain when I first wrote the song. But at the time, Bob Dylan’s album Down in the Groove had come out, and he had a Hank Snow song on it called ’90 Miles an Hour (Down a Dead End Street).’ As soon as I heard it, I said, ‘Well, so much for that!’ I rewrote it, edited it, and took that off. Tom said, ‘I love that line, it’s a great line. Why don’t you work it back up like you were originally thinking.’ Then I decided on my own to write a couple of other verses to fill it out.”

Some of the brand-new bonus material on This Sweet Old World will be familiar to longtime fans. Williams’ live versions of John Anderson’s 1982 No. 1 country smash “Wild and Blue” and her take on Brit-blues power trio the Groundhogs’ version of the traditional “Factory Blues” are heard on the 2014 reissue of Lucinda Williams. The honky-tonk original “Dark Side of Life” was Williams’ first L.A. recording, heard on the 1988 country compilation A Town South of Bakersfield Vol. 2. “What You Don’t Know,” written by John Leventhal and Jim Lauderdale, was an outtake from the original Sweet Old World sessions.