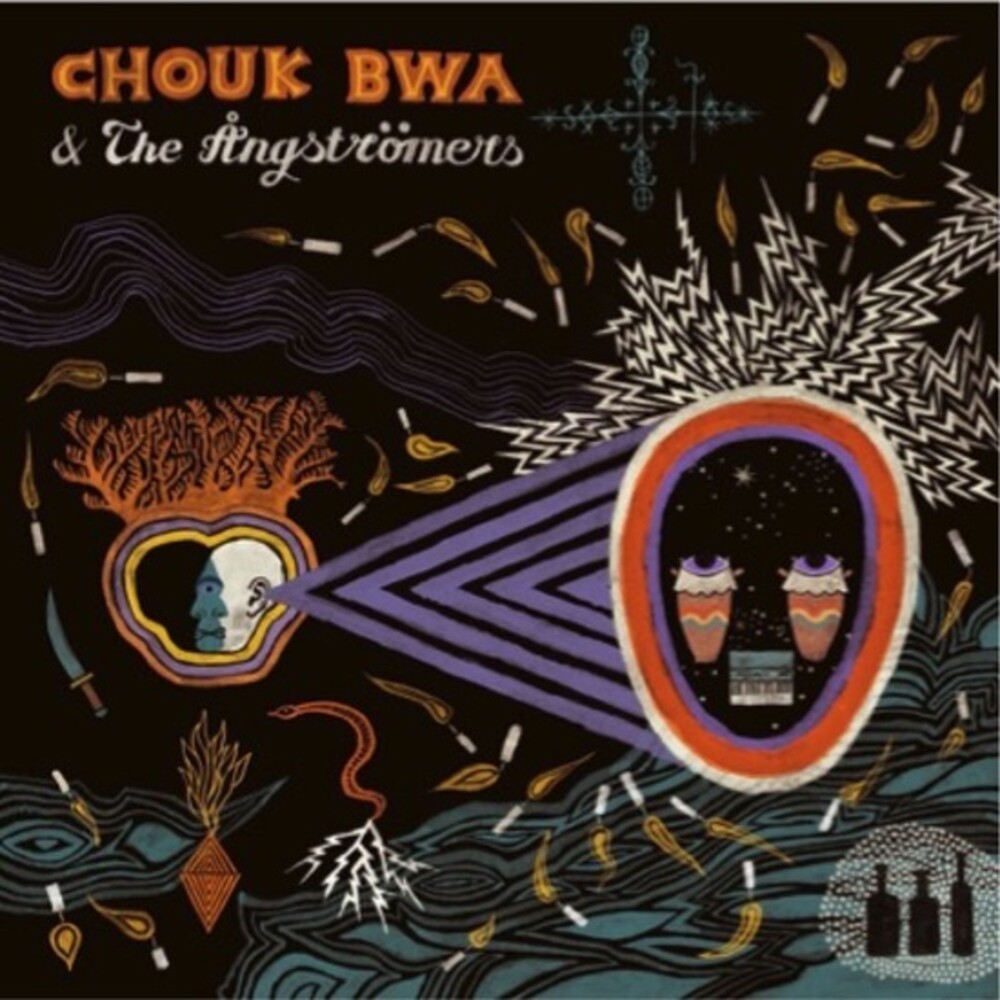 In 2016, haitian voodoo band Chouk Bwa and electronic production duo The Angströmers united to form Chouk Bwa & The Angströmers.Chouk Bwa play traditional Haitian music; they would fit in the ?Mizik Rasin? genre, alongside bands like Boukman Eksperyans, Boukan Ginen or Rasin Mapou from Azor. However, until their decisive encounter with The Angströmers, their most characteristic feature was their loyalty to the essential elements of Voodoo - therefore without any instrumental addition.Chouk Bwa was born in 2012 in the Gonaïves under the impulsion of singer and Samba (keeper of the tradition and moral figure in the voodoo culture) Jean Claude ?Sambaton? Dorvil.Initially the band?s full name was Chouk Bwa Libète, which can be translated by ?Liberty?s roots?, a reference to the famous shout uttered by Toussaint Louverture, an artisan of the Haitian revolution, who died in captivity at Fort de Doubs in 1803: ?By overturning me, only the trunk of the tree of liberty fell in Santo Domingo, but it will grow again for it's roots are deep and numerous?.Following their meeting with Belgian musician Michel Wolteche in 2012, the band starts an international career that leads them to a selection for a showcase at the WOMEX 2015 and that will make them tour in more than 10 european countries (playing shows notably at the WOMAD Charlton Park, Roskilde Festival, Forde Festivalen), as well as in Malaysia (Rainforest World Music Festival), Canada (Sunfest, Vancouver Folk Festival, Calgary Folk Festival) and the USA (Savannah Music Festival). In 2015, their first album, Se nou ki la!, is released on Buda Musique.Chouk Bwa?s music combines multiple characteristic Voodoo elements: rhythms, dances and chants. These are the roots, removed from Africa and secretly replanted in a new earth. The percussionists, going from one rhythm (and therefore one cultural reference) to another, act as collective memory smugglers, and their instruments are the material demonstration of this diversity. The dance is neither aesthetic nor premeditated, it is real; it is not about a ?show? or a ?choregraphy? but rather about a connexion with the drums? spirits. On top of this, the singer?s voice ascends effortlessly above the instrumentation, which also includes bamboos and lanbi.The setlist during a show is made up of original compositions by Sambaton as well as traditional songs rearranged by the band. As a fervent homage to the Lwa pantheon, the entire repertoire is sustained by the voodoo mystic, and throughout a song, it is sometimes the Haitian farmers? voices, in their daily struggle for survival, that express themselves by narrating scenes of life, sometimes with the impatience of a political speech.The singularity of this music lies in the fact that it offers a ?material? very close to ceremonial music (without any significant addition) and organizes it and, in a way, concentrates it in a shape that gives it an powerful impact, accessible to a large public, however without ever distorting nor polishing it.The Angströmers, an electronic music duo consisting of Nicolas Esterle and Frédéric Alstadt, constitute one of the artistic emanations of the label The Angströmers.Founded in Toulouse in 1998, the label organizes events, co-produces cine-concerts with the Toulouse film library and produces one or two albums per year. In 2007 the structure is refounded in Belgium, and starts concentrating it's activity on the mastering studio and the label. Following the premature death of one of the founding members near the end of 2008, the label is put on standby, and only a few albums continue to get released episodically. The studio becomes a well-known actor of the alternative Belgian scene, specialized in vinyl mastering.As musicians, certainly fed by their engagement in the label and the mastering, The Angströmers spread their music full of bass and echos, influenced by dub and drone music, all over the underground European stages. All along their encounter with the voodoo culture, they learn to expand their sound by immersing themselves into complex polyrhythms. They develop an electronic psychedelic music, free of all the codes of binary, 4/4 standards that dominate the club world.