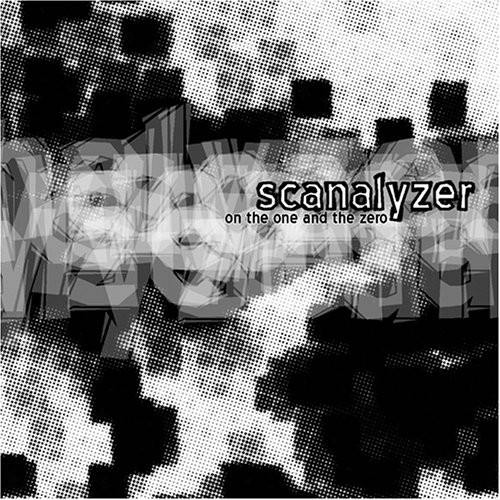 On The One & The Zero
Artist: Scanalyzer
Format: CD
New: Not in stock
Wish

Scanalyzer is the bastard love child of Sister Machine Gun's Chris Randall and Wade Alin of Atomica and Christ Analogue. Their debut album, On The One And The Zero, is a tour-de-force of glitch-hop, noisecore, and IDM, with a generous dose of dancefloor groove thrown in to complete the mix. The tension of the album is palpable as Randall and Alin go to great lengths to out-do each other via complicated drum-noise programming and grinding synthesizers. This album is not to be missed if you're a fan of esoteric electronica. ---------- REVIEWS ---------- XLR8R On the One and the Zero is a chunky bit of synth work with thrashalong drums from a group that clearly has been immersed in German and Eastern European hard tekno and breakcore. Scanalyzer focuses intensely on squeezing every last drop out of their gear and plug-ins; this makes for sounds reminiscent of the industrial scene from which the group sprang. Though this record lacks the wicked warm dub of a screaming Scud or Full Watts production, it's still solid and worth checking for those who are down for the core. - Matt Earp Plastik Sickness The first full release from the proclaimed 'bastard love child' of Chris Randall (Sister Machine Gun) and Wade Alin (Christ Analogue) is nothing short of a masterpiece. Branching into electronica-infused drum-n-bass, glitchy IDM with a hint of power electronics and distortion thrown in for good measure, this project refuses to be pigeonholed into a specific sound and dips into several sub-genres of the electronic scene. Some of these tracks, like 'Moretech' and 'One Seventy Five', are songs with dance floor-friendly appeal. After that upbeat, energetic sound you hit interludes like 'Hifishit' (a mellow break with a little piano melody and some quiet voice playback) and songs like 'Monotreme' (deep bass mixed with ambient textures) to bring you back down. One of the many great things on this album is that although each track is distinctive, they progress smoothly from one to the other, producing what could be the perfect soundtrack to an indie film, or just to your life. I truly believe Scanalyzer has it's own unique sound, so it's impossible to say it 'sounds just like' anything. However, on various tracks I detected hints of and Beyond Digits (techy-drum-n-bass), Black Lung/Xingu Hill on 'The Andronechron Incident' (glitchy, ambient IDM) and even some of Randall's electro-oriented project, Micronaut. As the more experimental side of music seems to be a niche set of listeners, I can't promise this will appeal to everyone. Fans of Ad Noiseam and Ant-Zen artists should have no problems eating this one up. If you're someone who finds a full album of to be too abrasive, I think Scanalyzer provides an easier format for you to get into. In short it's just refreshing to find a project that strays away from overdone cliches of genres (ahem, futurepop anyone?) and provides us with a well-produced, diverse album. Highly recommended. - DJ I.Z. VIRUS! Magazine Call it whatever you want. Call it 'branching out,' a 'side band,' or even a 'vanity project.' Whatever name you give this album, which is the product of Chris Randall (Sister Machine Gun) and Wade Alin (Christ Analogue, Atomica), appreciate the fact that here are two people who know exactly what they are doing, and are opting for a modern electro soundtrack. - Haakon Nelson Morbid Outlook This joint effort of Wade Alin of Atomica and Chris Randall of Sister Machine Gun is a sort of darkwave 'synth-off,' both electronic artists trying to outloop, outgizmo, outgroove, and outstrange one another... plus, you can dance to most of it! All instrumental except for some odd sprechtstimme here and there. All in all an enjoyable session of noisemaking from two electronicists who simply have too much going on for a single band to encompass. - Andrew Fenner Igloo Magazine On The One And The Zero is Randall and Alin laying bare their love for the metallic clatter of EinstĂĽrzende Neubauten, their inner furor for Squarepusher beat collisions and their nascent tumescence for glitch and static-pop. They've made a record of junkyard funk, a fusion of synth-pop (sans such ephemeral nonsense as lyrics) and machine noise that beats with just a jackhammer fury that it sweats viscous oil...Scanalyzer is the sound of the free underground radio stations of the next generation: built in the basement, mastered in the kitchen and blasted into the ether by a hand-made transmitter hidden out behind the tool shed. Raw, noisy, and sure to raise blisters on your lips as you kiss your speakers. - Mark Teppo Smother.net Teaming up in Scanalyzer is Sister Machine Gun's Chris Randall and Christ Analogue's Wade Alin. Their full-length debut On the One and the Zero sees a return to electronic ingenuity and industrial waste lands. The rhythms are noisy and populated with incredible engineering efforts that show off both artists extreme programming skills. Bleep-happy hipsters will love the IDM and glitchy beats but this is an album that is experimentally catchy. The soundscapes are dark and cavernous, and you're often furiously tripping out over the complex nature of the synthetic melodies. - J-Sin.