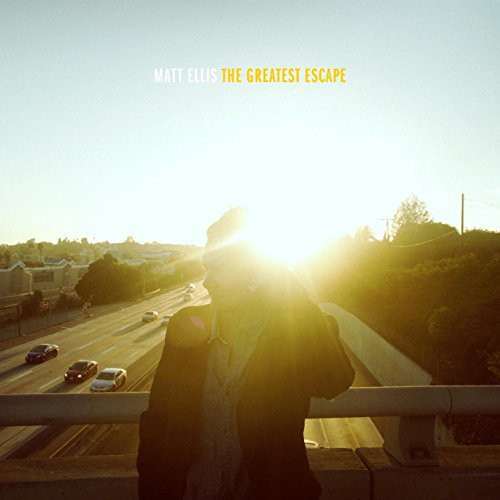 "The Greatest Escape", 12 new songs produced by Matt Ellis and mixed by Craig Schumacher is out Tuesday October 21st. ?Matt Ellis' new, fifth album, recorded and mixed at Wavelab in Tucson, AZ, has a new, tougher sound? that recalls the Australian Singer/Songwriters early rock roots. Based in California since 2005,? Ellis' sound has evolved effortlessly over the past decade blending Country, Rock and Folk in the ?tradition of Tom Petty, Neil Young and Ryan Adams. Last December, Ellis and his band headed to Tucson, AZ and recorded 13 tracks over 4 days. Produced by Matt,? the live tracks were engineered by Chris Schultz and Craig Schumacher (Neko Case, Calexico, The Jayhawks).? Ellis returned home to Los Angeles, CA to complete recording, teaming up with Nick Luca (Calexico, Iron & Wine).? The pair spent the following months, setting up in multiple home studios adding Vocals, Fender Rhodes, Piano? and additional Guitars, before Matt returned to Tucson to mix the album with Schumacher, ?the celebrated engineer behind his last two releases. The result is a loose classic rock feel, steeped in Americana and Folk. Ellis' trademark voice is in fine form and ?the songs have an extra level of detail, but the long list of guest musicians is gone. The band Matt put together to promote his last full length, "Births, Deaths & Marriages" (2010), is still with him, and he was inspired to build ?this album around them. Throughout 2013, Matt was presenting unfinished songs to Josh Norton (Guitar), Fern Sanchez (Drums),?Grant Fitzpatrick (Bass), Tim Walker (Pedal Steel) and his wife Vavine (Vocals). The group would jam on songs?over multiple sessions, letting arrangements and feel develop naturally, the same approach the band took? to the recording sessions. A double A-Side single, "On The Horizon/Thank You Los Angeles" was released in late August.? Since the release, the band has been promoting the new songs with a launch at The Del Monte speakeasy, a slot on ?the Abbot Kinney Fest and The Desert Stars Festival at Pappy & Harriets. Matt Ellis is launching the new album on? Wednesday October 22nd at Harvard & Stone, in Los Angeles California. A tour is in the works for early 2015.